Yesterday we started our exciting journey to finally meet our new grandson!

When we arrived at the airport, after all the checking in and going through security, we wanted to get some snacks and some water for the plane. On the way to our gate, there is a snack souvenir bookstore combo along the way.

After a little shopping, we get in line to pay for things. The man at the register announces if we are paying by credit card, there is a self-checkout area. Literally, my first thought as we moved over to that area was, “I’m not sure if you know this yet, but you will soon be out of a job.”

Andrew Yang’s book, The War on Normal People, talks extensively about how technology will eventually take the jobs of millions of Americans. The technology will make doing many things more convenient, which for the record,I love technology and see a place for it, but at what cost to employment?

In his book, he uses several examples. One is about how self-driving trucks will eventually be the norm. Without a driver, who must stop for bathroom, eating and sleeping breaks, a self-driving truck doesn’t need to stop for any of those things. This probability is very high if you’ve ever taken a ride in a Tesla, which can drive itself by sensing all of the things going on around it as it moves. 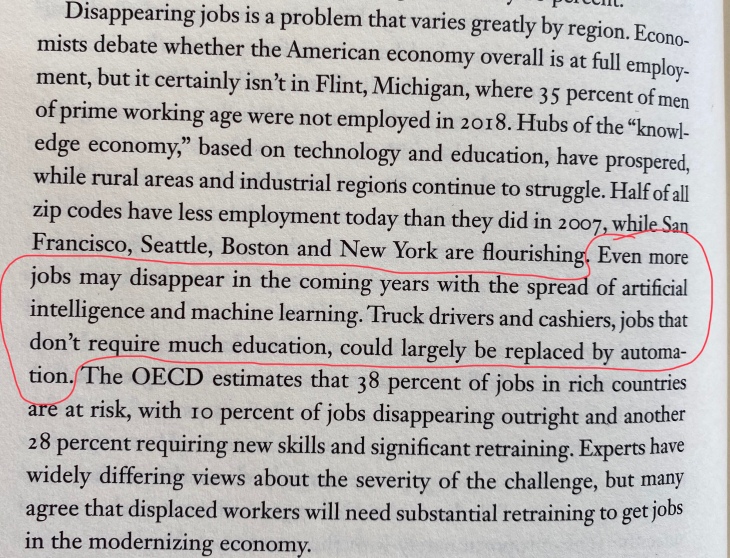 As the technology improves, we will see the beginning of the gradual (or not so gradual) shift from having a truck drive itself on the straightaways of our national highways, with the driver maneuvering inside the congested areas. The next phase will be drivers along for the ride just in case something unexpected happens the truck hasn’t “learned” to deal with yet. The final phase will be a truck without a driver, thus putting the millions of mostly older men drivers out of a job. Yang then describes what will happen to those unemployed men, and it isn’t a pretty or or a safe picture.

If you pay attention, you will begin to notice how this gradual shift from people doing a job to technology doing the job, usually without people, has already begun. The above airport experience is one example. Others include toll booths where you throw coins in a cone; self-checkout at Target, Kroger or Smith’s; placing an order for food at Costco; or checking your own luggage at the airport.

Has each of these things made life a little more convenient and allowed us to move to our next errand or task more quickly? In most cases, yes—except for baggage tags, at least for me; I still struggle with putting those on correctly. Those perceived time savers and conveniences have helped us, but at what cost?

How many cashiers, order takers, luggage handlers, and the myriad of other people displaced by technology right now are at home, looking for work or having given up looking for work? How many have lost homes, have lost hope, are now receiving government assistance, are addicted to opioids or alcohol, or are being abused by an angry spouse?

All because a company cares more about massive profits than people?

In the end, we all pay the price for laid-off and displaced people through higher crime, higher suicides, or ever more angry people taking their anger out on the people around them or the perceived other. Yes, there is a price for convenience and profits.

The question becomes, how high a price are we willing to pay for convenience and profits? How do we balance the needs of human beings over the wants of a balance sheet and stock market numbers?

At what return on investment do we say its about people over massive profit? After all, how many billions of dollars are sufficient for one person? And, are all those billions worth the lives of millions of people, and ultimately to our way of life and good of the Country?

At what price point do you think that is?

[Revised to include text picture from Tightrope: Americans Reaching for Hope
by Nicholas D. Kristoff and Sheryl WuDunn.]